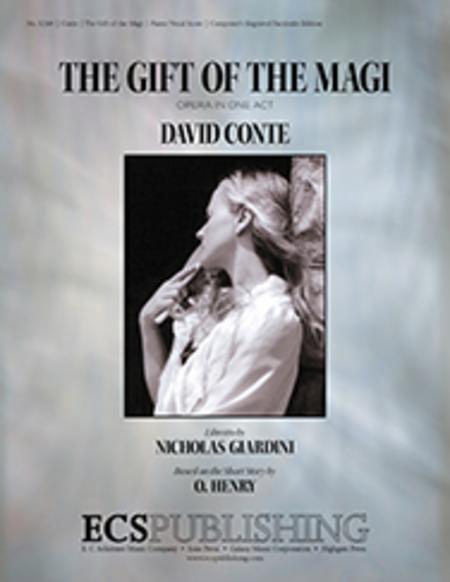 Nicholas Giardini's libretto captures the essence of the operatic drama contained in the classic O. Henry short story. Della (Soprano) and Jim (Baritone) are a young couple in love, entirely devoted to each other. They share a cold-water flat, being very poor.

The action takes place late in the afternoon on Christmas Eve. After having pledged not to exchange Christmas gifts, both decide to sell their own most precious possession in order to buy what each thinks will make the other most happy. Even though Jim adores her long, flowing tresses, Della sells her hair to wig makers so she can buy Jim a chain for his pocket watch. When Jim buys Della an exquisitely elaborate comb for her hair, the only way he can raise the money is to sell his heirloom watch. In separate scenes, both lovers have confidants who try to dissuade them of their plans, each without success. In the final scene,after the couple has exchanged their gifts, Jim and Della reaffirm their love for one another, which they now realize is the greatest gift of all.

"With its warm sentimentality and easily absorbed archetypal themes, the O. Henry story line lends itself to operatic treatment... We might have expected a sparse and almost folklike musical treatment, designed to convey the familiar moral themes about love and selflessness during the holidays. Conte instead has lavished musicc of grand romantic feelings upon the proceedings, providing this simple tale with a lush spectacle of extravagant lyricism... Aided by the clarity of Giardini's articulate libretto, Conte exercised particular skillful[ness] in integrating specific events, acts, and even the characters' gestures into his orchestration. The work was also framed by striking a cappella ensemble numbers, sung off-stage and evoking the guiding spirit of the three Magi." - Ching Chang, San Francisco Classical Voice.