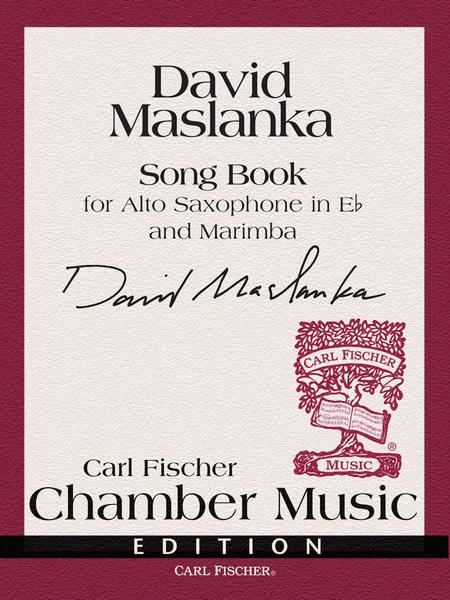 From one of Americas most well-known composers of music for band and winds comes Song Book, a pleasant addition to the Chamber Music Catalog. This set of songs, often thoughtful and whimsical, is full of wonderful colors. The first three of seven short movements are based on three well-known chorales of Johann Sebastian Bach, which have evoked varied emotion in the composer. The work is expressive and passionate at times and reflects the people and events that have been a significant part of the composers life.
Performance Notes Song Book was commissioned by Steven Jordheim and Dane Richeson of the Lawrence University Conservatory of Music, and was composed in the summer of 1998. The four-part chorales by Johann Sebastian Bach have become a central part of my music study. Playing and singing a few of them each day has become my way of making the transition into composing time. I sing the soprano, alto, tenor, and bass parts successively while playing all the parts at the keyboard. At this writing I am on my ninth pass through the collection. With each pass I am drawn deeper into the relationship of line to linehow one borrowed melody (the chorale tune) generates three other beautiful melodies in the same space, and how all parts together generate a pattern of harmonic movement. I am fascinated by the process of these pieces, and they have become a strong influence on my composing. Three chorale melodies appear in Song Book. I have taken them quite out of their liturgical context. Their titles inspire an emotional response in me, and out of this comes a music that expands on the original tune. My feeling for quotation is twofold. First, when a pre-existing melody comes to mind or hand while I am writing a new piece, it is a suggestion that the tune has something more to say, and that it will unfold differently in the new context. Secondly, it allows for the process of going underneath the old tune to find something quite different and new. I let this happen because it seems that deeper connections are trying to work themselves out over many years and across many pieces. Folk and jazz artists do this as standard procedure. The movements of Song Book are relatively brief. They have a particular thing to say, a particular mood and attitude to express, and then they are done. I think of the pieces as emotional scenes. 1. Song for Davy is a reworking of the chorale melody Das alte Jahr vergangen ist (The Old Year Is Past). This is a song for my young self, written at a time of personal transition. The music touches a very old memory chord and has a wistful and haunting character. 2. Lost is based on the chorale Herr, Ich habe misgehandelt, which translates roughly as Lord, I have done the wrong thing. Out of this sensibility comes the feeling of being lost and needing help. 3. Hymn Tune with Four Variations is the only movement that uses a hymn tune verbatim. The melody is Werde munter, mein Gemute (Be Strong, My Heart). Each variation is a successive speeding up of the chorale statement, with the last being a chaotic scramble. 4. Serious MusicIn Memoriam Arthur Cohn is the longest and soberest piece in the set. Arthur Cohn was for many years the director of the Serious Music Department at Carl Fischer, and over a lifetime a stalwart champion of living composers and new music. My association with Fischer began through Arthur in 1974, and over the years he became both mentor and friend. His death in 1998, though not untimely, was a great sadness for me. The designation Serious Music by the Carl Fischer Company of what would otherwise be called Concert Music has always amused me. And so I have written a VERY serious piece for Arthur and hope that he appreciates the little joke. 5. Summer Song is a sweet piece that needs no further explanation. 6. Song for Alison is for my wife, who has been a grounding influence on me for many years. She is not a musician, but has, through her kindness, steadiness, and love, provided a safe haven for my flights of fancy. 7. Evening Song brings to mind some of my favorite music, the op. 116 Intermezzos for piano by Brahms. Evening Song, like other pieces in the set, is an openly Romantic music. It is ultimately quiet and resigned, but has, over its course, an urgent and passionate statement to make. David Maslanka.