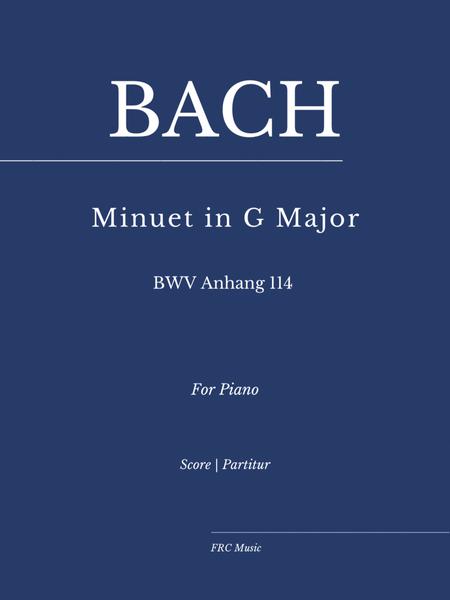 The Minuets in G major and G minor, BWV Anh. 114 and 115, are a pair of movements from a suite for harpsichord by Christian Petzold, which, through their appearance in the 1725 Notebook for Anna Magdalena Bach, used to be attributed to Johann Sebastian Bach. These Minuets are among the best known pieces of music literature.In the late 17th century Christian Petzold became organist at the Sophienkirche (lit. 'Sophia's Church') of Dresden. By the time Johann Sebastian Bach started to visit Dresden, Petzold was well acquainted with several of the city's musicians, including the violinist Johann Georg Pisendel, with whom Bach was also acquainted. In 1720, Petzold composed the music for the inauguration of the new Silbermann organ of the Sophienkirche. Bach gave a concert on that organ when he visited Dresden in September 1725. Petzold died in 1733: as organist of the Sophienkirche he was succeeded by Bach's son Wilhelm Friedemann.In the Notebook for Anna Magdalena Bach:The second Notebook for Anna Magdalena Bach was started in 1725. It opened with two harpsichord suites, that is, the Partitas BWV 827 and 830, composed and written down by Johann Sebastian Bach. Anna Magdalena Bach likely received the notebook from her husband in the autumn of 1725, as a present for either her birthday (22 September) or their wedding anniversary (3 December). Nos. 3 to 11 in the notebook are keyboard pieces written down by Anna Magdalena, likely shortly after she was given the volume. No. 3, the first piece after the two seven-movement Partitas, is a Minuet in F major by an unknown composer (likely not Bach), adopted as No. 113 in the second annex (German: Anhang, Anh.), that is the annex of doubtful compositions, in the Bach-Werke-Verzeichnis (BWV). Petzold's Minuets in G major and G minor, BWV Anh. 114 and 115, are the next two entries in the notebook (Nos. 4 and 5). These pieces may have been brought back from Dresden by Johann Sebastian when he visited this city in September 1725.Bach likely intended the simple binary dances contained in Anna Magdalena's notebooks, including the Minuets entered without composer indication, as teaching material, likely rather for his younger children than for his wife.