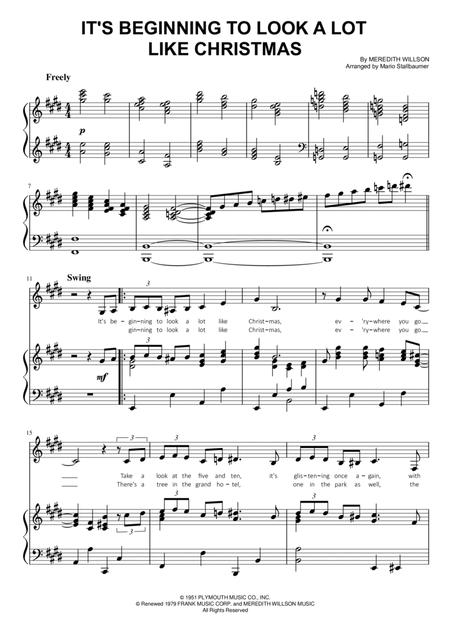 With this sheet music, you can play "It's Beginning to Look a Lot Like Christmas" on piano!
It's a beautiful piano arrangement of Michael Bublé's recording of the song.
The full melody is included in the piano part, so it makes for a perfect instrumental (piano solo) cover.
Of course, you can also use this piano arrangement to accompany a singer, or sing along yourself - this sheet music includes a system for the singer, as well as the song's full lyrics!
Written by Meredith Willson in 1951, the song was recorded in the same year by Perry Como and the Fontane Sisters, as well as by Bing Crosby.
Michael Bublé recorded his version for his 2011 Christmas album. It became the first track on the album, and served as the album's second single.
"Christmas" became Michael Bublé's most successful album - it sold over 12 million copies, topped the Billboard 200 chart, and won a Juno Award for Album of the Year!
Today, his cover is arguably the most famous version of the song, and has been streamed more than 350 million times on Spotify.
"It's Beginning to Look a Lot Like Christmas" is a beautiful, jazzy Christmas song, and makes for a fantastic piano cover!