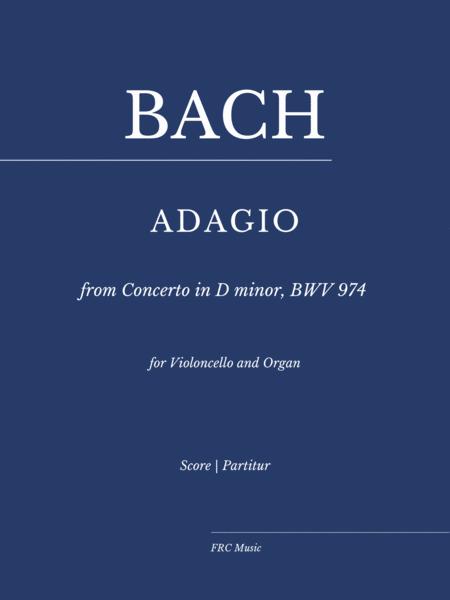 The score was arranged based on the recording made by Elise Robineau:

The Concerto for Oboe and Strings in D minor, attributed to Alessandro Marcello, is one of the most performed oboe concertos in the repertory. It was written in the early 18th century and has become Marcello's most famous work. Bach wrote a keyboard transcription of the concerto. Here we offer an arrangement for Violoncello solo and Organ based on Bach's transcription and Elise Robineau's recording.

The Oboe Concerto in D minor, S D935, is an early 18th-century concerto for oboe, strings and continuo attributed to the Venetian composer Alessandro Marcello. The earliest extant manuscript containing Johann Sebastian Bach's solo keyboard arrangement of the concerto, BWV 974, dates from around 1715. As a concerto for oboe, strings and continuo its oldest extant sources date from 1717: that year it was printed in Amsterdam, and a C minor variant of the concerto, S Z799, was written down.

Bach's keyboard version was published as an arrangement of a concerto by Antonio Vivaldi in the 19th century. In 1923 the C minor version of the oboe concerto was published as a composition by Benedetto Marcello, Alessandro's brother. In the second half of the 20th century several publications indicated Alessandro again as the composer of the piece, as it had been in its early 18th-century print, and the oboe concerto was again published in its D minor version.