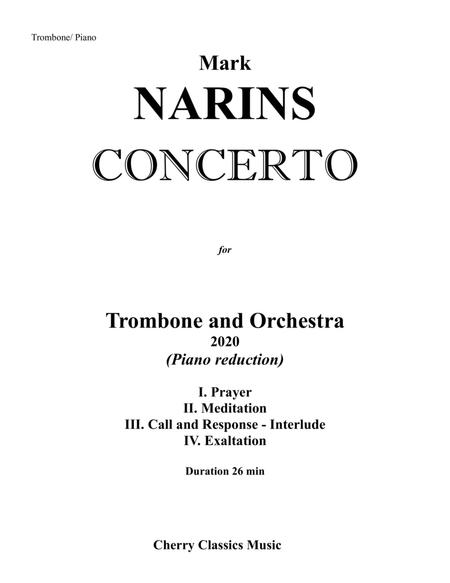 Cherry Classics is pleased to introduce Concerto for Trombone and Orchestra 2020 (Piano reduction) by San Francisco based composer/conductor Mark Narins. The concerto is in 4 movements:

Here is a description of the work by Mark Narins, the composer:

Prayer: The first movement starts with a shimmering tremolo in the strings over which the silver voice of the trombone plays an arching phrase that lingers on an extended appoggiatura. The trombone is a lone mystic reaching for the sky and then falling perilously down to the pedal register. Later the orchestra breaks into a frenetic vamp over which the trombone plays intense ascending scales and passage work. The movement ends with an ascent to a high C#, moving to a final ringing high C.

Meditation: After the harp lays out a series of arpeggiated chords, the trombone plays a warm, rich theme in the middle range. The following episodes are variations on this theme. The trombone moves into the upper register, floating with the ease of a lead trombone in a big band. The movement ends with an ascending yearning phrase reaching a high D as the soloist touches the sky and then comes gently back to earth.

Call and Response: The orchestral accompaniment starts in an anxious, mysterious tonality. The trombone enters with a burst of energy playing a machine gun series of Fs. The movement develops into a series of short brilliant solo passages answered boldly by the orchestra. This movement showcases the stunning declamatory powers of the trombone.

Exaltation: Movement 4 starts as an allegro with intense tremolos in the basses.  The trombone breaks out into an articulated driving theme followed by several extended melodic passages. Midway in the movement the strings abruptly lay out a syncopated Latin dance rhythm over which the trombone climbs from the bottom to the top of its range in rapid triplets. In the final codetta the trombone accelerates the dance tempo and climaxes on a series of high C#s in a brilliant and joyous fashion.

The concerto is 27 minutes in duration and is appropriate for advanced performers. This version with Piano is a reduction of the full Orchestral version (to be published in the near future).

“The new Trombone Concerto by Mark Narins is a very exciting piece with dramatic contrasts between the slow and fast sections. The move to the finish of the piece makes for a great wrap-up. It's a real blow for the player, really exploring the range of the instrument. It will be demanding and fun for the trombonist. “