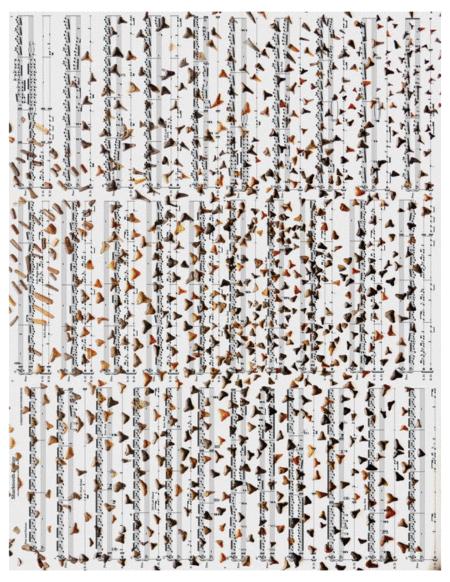 I wrote Sharktooth Frenzy for Danny Holt in January 2014, while in residence at The Hermitage Artist Retreat in Manasota Key, Florida, a special place, paleotologically, because fossilized shark teeth from up to 50 million years ago wash up on the beach here every day. Around 50 million years ago, Florida was completely under the ocean, and layers of limestone accumulated to create the bed rock of Florida. Starting around 30 million years ago, as the Earth cooled, sea levels dropped and Orange Island emerged in what is now north central Florida. 10 million years later, in the Miocene period, tectonic activity forced uplift around Orange Island and Florida began to resemble the land mass it is today. The coastal area was still covered by a shallow sea, but land animals lived inland. Further north the Appalachian Mountains were forming and sediment was flowing into Florida making very nutrient rich waters, which sank to the bottom of these shallow seas entombing dead marine animals and teeth from sharks (sharks loose teeth frequently, going through up to 30,000 in their lives). This continued until around 5 million years ago. There is an abundance of these fossilized teeth and other bones in the Peace River Formation and Myakka River, which washes out into the gulf each day, and then subsequently the fossils wash up onto the beaches of Manasota Key and Venice Beach. So while I was composing this piece for Danny, I was also obsessively collecting shark teeth. I’d go out each day as the tide was retracting and collect hundreds, actually thousands, of teeth. And it was a bit of a frenzy. So I decided this piece had to be about this process, collecting as many teeth as I could find and coming back to write music!

Christine Southworth (b. 1978) is a composer and video artist based in Lexington, Massachusetts, dedicated to creating music born from a cross-pollination of sonic ideas. Inspired by intersections of technology and art, nature and machines, and musics from cultures around the world, her music employs sounds from man and nature, from Van de Graaff Generators to honeybees, Balinese gamelan to seismic data from volcanoes.  Website: www.kotekan.com