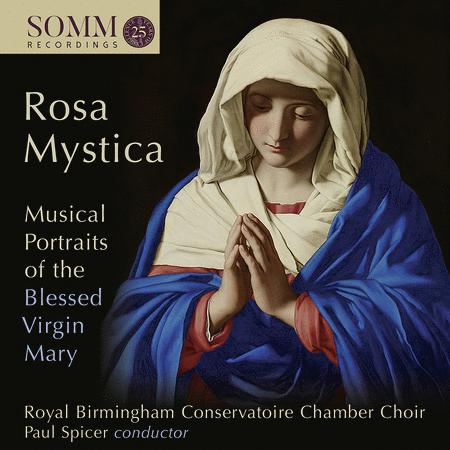 Conductor Paul Spicer and the Royal Birmingham Conservatoire Chamber Choir return to SOMM Recordings with a ravishing, centuries- spanning recital of musical portraits of the Blessed Virgin Mary. Rosa Mystica takes its title from Benjamin Britten's passionate setting of Gerard Manley Hopkins and forms the centrepiece of a programme ranging from the glorious Tudor polyphony of Nicholas Ludford's motet Ave cujus conception via Bruckner's dramatically contrasted Ave Maria to the Norwegian Ole Gjeilo's apparently simple but sophisticated Second Eve, composed as recently as 2012. Two versions of the Magnificat are heard in George Dyson's bewitchingly peaceful depiction of the Virgin Mary, composed just after the end of the Second World War, and Herbert Howell's more troubled setting for Chichester Cathedral in 1967. The enduring fascination with and devotion to Mary in the modern era is represented by a diverse array of composers from the austere, hushed, mystical atmospheres of John Tavener's Mother of God, here I stand, the jazz-Blues-accented Ave Maria of Carl Rutti, rich harmonic and colour palette of Judith Bingham's Ave Virgo Sanctissima and Trond Kverno's beautiful, unusual setting of Ave Maris Stella to Cecilia McDowall's short but highly effective carol, Of a Rose. The RBCCC are joined by Spicer's student in Birmingham, organist Callum Alger, currently an impressive young organ scholar at Westminster Cathedral. Paul Spicer and the RBCCC's previous SOMM releases include Partsongs by Sir Charles Villiers Stanford (SOMMCD 0128), hailed by MusicWeb International as "indispensable listening for all lovers of British music" and The Glory and the Dream, choral music by Richard Rodney Bennett (SOMMCD 0184), to which Gramophone respectively extended an "enthusiastic" welcome as well as collections of choral music by John Joubert (SOMMCD 0166), Samuel Barber (SOMMCD 0152) and Herbert Howells (SOMMCD 0140).