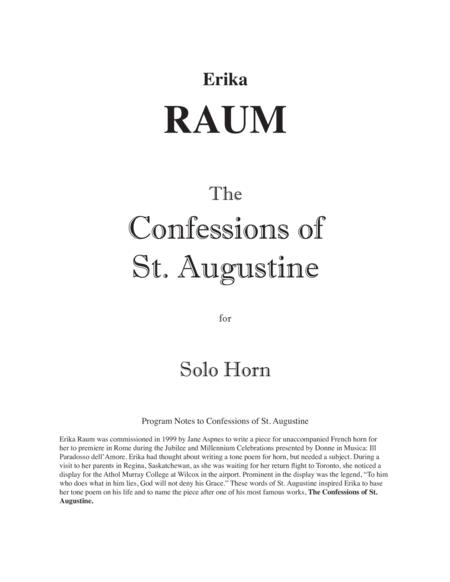 The Confessions of St. Augustine is a solo for Unaccompanied Horn in F written by Canadian violinist/composer Erika Raum.

St. Augustine (of Hippo) was a 5th Century convert to Christianity who was one of the first philosophers and theologians of the faith. He went on to write a number of important works including the autobiographical work Confessions, a series of thirteen books outlining his sinful youth and eventual conversion to Christianity.

Youth and Pagan Beginnings, The Mystical Voice of the Child in the Garden, St. Augustine, Bishop of Hippo, The Debate at the Baths of Sozius.

This work of almost 7 minutes in length is very expressive, with many contrasting sections and complex rhythms, and is rather moderate in range, being accessible to moderately advanced to advanced performers.

The beautifully performed sample track from the horn version of this work (up a 5th from the trombone version) is played by Howard Wall, Hornist of the New York Philharmonic, taken from his solo recording Horn Monologues for sale on Amazon and elsewhere.

This edition is available as an eBook on iTunes and Kindle.