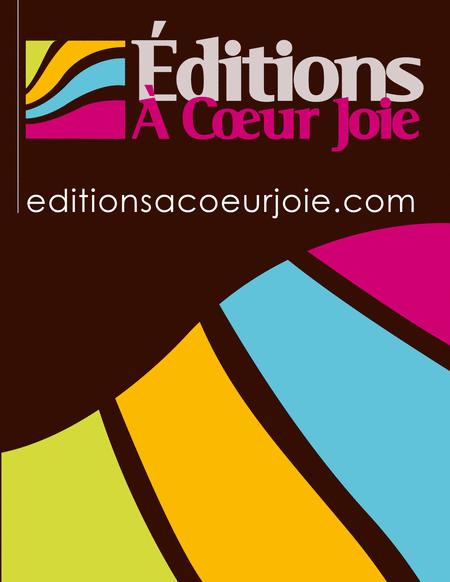 The Missa Brevis for 3 voices in E flat was published in 1878 by the Parisian publisher Graff for soprano, alto and baritone tessitura with organ accompaniment and double bass ad libitum. A short Mass indeed since it contains only four of the five parts of the Ordinary of the Mass. The Creed is omitted and, musically, the Agnus Dei will be a reprise of the original Kyrie.
It is this complete version in small numbers that we offer with this present edition.
In 1893, Theodore made an orchestration for violins 1 & 2, viola, cello and double bass, harp and organ of this mass. This new orchestral presentation, with a larger number of instruments, will remain manuscript, unpublished; a piece currently kept at the Bibliotheque nationale de France (BnF: Res. Vma, ms. 729).
This second version was made to be superimposed on the first one, the writing for choir not changing, except for a few minor details. This is why we also propose - in addition to the original score for choir, organ and double bass - the possibility of performing this mass with the enriched instrumental staff that Théodore Dubois himself had chosen.

héodore DUBOIS (1837-1924) is today better known to music professionals with his Treatise on Theoretical and Practical Harmony than to the general public because his works, although numerous, are very rarely played or sung.
Apart from chamber music, symphonic or organ music, there is a large lyrical production (comic operas, ballets) and an impressive catalogue of motets, oratorios and masses.
Although the Grand Prix de Rome he won in 1861, this composer made a career as chapel master and organist at the Madeleine church (succeeding Saint-Saens), before teaching harmony and composition at the Paris Conservatoire, of which he later became director.
His sacred music is characteristic of that of the French musicians of the end of the 19th century, as shown by the three solemn masses, full of emphasis, and the three short masses, a testimony of conciseness and interiority like the other masses of his time, by André Caplet or Gabriel Fauré.
(Jacques BARBIER)