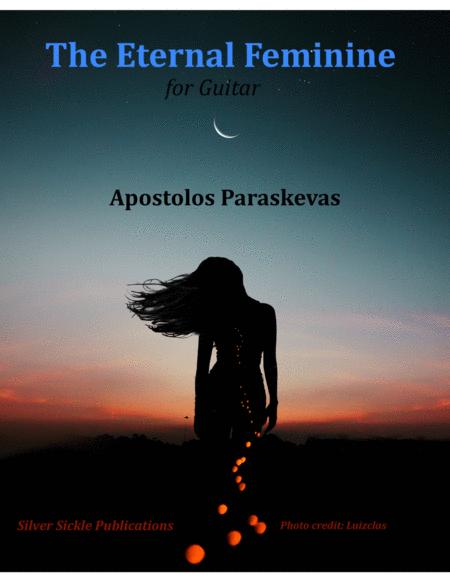 Thethought to compose a piece for Joaquin Clerch was challenging and exciting atthe same time. Writing music for a performer is one thing but to write musicfor a performer-composer is a different. The work was premiered at Jordan Hallin Boston at the Boston Guitar Festival in the summer of 2016.  I chose three Greek Goddesses for the task.Aphrodite, Artemis and Athena. All with different characteristics and charms.Aphrodite the Goddess of Love and Beauty, Artemis the Goddess of Hunt, Natureand Birth and the last but not least Athena Goddess of War and Wisdom.

Aphrodite’smovement builds up from the first theme as if she tries to perfect her beautylittle by little. Flirting with tonality but could never reach it.

Artemis’smovement is exciting in the sense of anticipation. A recurringostinato-obsessive as an eminent killing is about to happen. The hunt is goingon…

Athena’smovement is surrendering to the dark force of calculating distraction.Technically challenging makes a serious turn to absolute music with a recurringpassacaglia theme as the main force of direction. The war goes on for a whilebut wisdom prevails…

Apostolos Paraskevas is a classical guitarist and composer as well as an award-winning filmdirector and producer. He has received multiple international awards for hiscompositions and was nominated for a Grammy Award. He is the only guitaristever to have a major orchestral piece performed at Carnegie Hall under thedirection of Lukas Foss––and the only musician who has performed there in aGrim Reaper outfit. He was the founder and served for 16 years as the artisticdirector of the International Guitar Congress-Festival of Corfu, Greece.  He is a voting member of the RecordingAcademy (Grammys).

The Groves Dictionary of Music