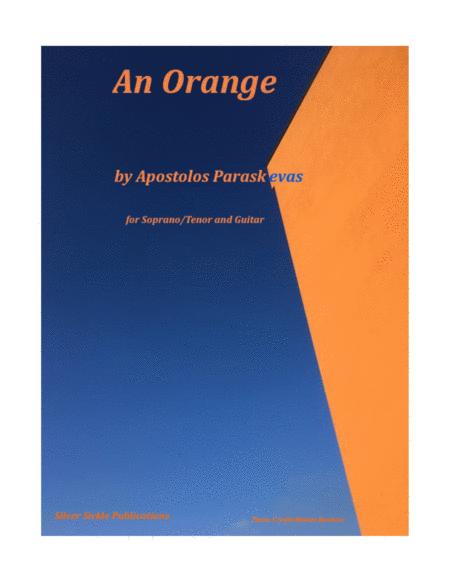 This witty and extremelyfun work to perform by composer Apostolos Paraskevas was conceived after realevents. There is a version for Soprano/tenor and Piano and one for guitar aswell. Easy to perform and the text was inspired of the following narrative.

I Slaughtered an Orangeover the Sink...

...and it just sat there…It didn't say a word, not a sound of anguish, not evenwhen my teeth started to tear apart it's flesh little by little... I knew itwas a special orange but I couldn't fathom the magnitude of its character…Evenwhen gentle I took it away from its friends there at the top of the kitchencounter, it looked at me almost with a sense of gratitude. Yes, gratitude.! Asif it was saying: "Thank you! Thank you for helping me to fulfill thepurpose of my life…Since I was a little seed I knew I would serve a higherpurpose. My sacrifice will help a human to become a healthier mother, doctor,composer, a better scientist".

Yes, I think I felt it said…a better composer as well.

...and there I was, sinking my teeth deep inside its flesh and taking all ofwhat it had to offer. It's life, it's substance, it's gratitude for serving ahigher purpose.

I slaughtered it over the sink, to avoid any evidence of what had happen there.The remaining outer sell, I placed it on the stove top and lighted up withfire, as my mother use to do, to release the heavenly smell and there it was.Evaporated everywhere! I inhale it, It became totally a part of me.

Today, I slaughtered an orange over the sink and I didn’t say thank you!

Apostolos Paraskevas is aclassical guitarist and composer as well as an award-winning film director andproducer. He has received multiple international awards for his compositionsand was nominated for a Grammy Award. He is the only guitarist ever to have amajor orchestral piece performed at Carnegie Hall under the direction of LukasFoss––and the only musician who has performed there in a Grim Reaper outfit. Hewas the founder and served for 16 years as the artistic director of theInternational Guitar Congress-Festival of Corfu, Greece. He is a voting member of the RecordingAcademy (Grammys).