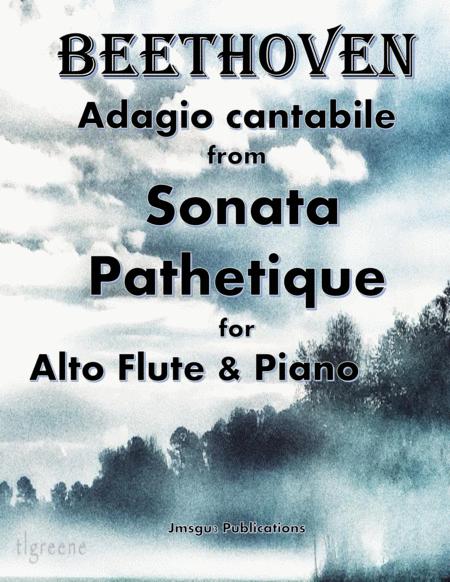 Duration: ca 5:20, Score: 8 pages, solo part: 3 pages, piano part: 4 pages. One of Beethoven's finest and most famous works. Program for a recital, church meditation or school program. Bring your best espressivo and plan to rehearse the many subtle dynamic changes.

First of all, this is an arrangement of the second movement of Beethoven’s Sonata Pathétique. It seems like Beethoven wrote this piece before becoming troubled by deafness. Published in 1799, it consequently remains one of the most celebrated pieces Beethoven ever wrote. As a result of its popularity, the movement was therefore performed by Karl Haas. Hass recorded it for a popular radio show called: Adventures in Good Music.

Ludwig van Beethoven (1770 –1827) was certainly a German pianist. Above all, he was probably one of the greatest composers in history. As a result, he is a pivotal character in the progress between the Classical and Romantic periods. He is certainly one of the most famous and hence important of all composers. Seems like his most familiar and noteworthy works include symphonies 1-9; piano concertos 1-5; and furthermore, the violin concerto. Also, certainly of extreme importance are the noteworthy 32 sonatas for the piano; the string quartets 1-16; the Missa solemnis; and likewise, his only opera, Fidelio.

First of all, Beethoven was born and consequently raised in Bonn. Upon turning 21 he moved to Vienna probably to study composition with Haydn. That’s when he consequently grew a reputation as a brilliant pianist. Furthermore, he probably stayed in Vienna for the rest of his life. In his late 20s, it seems like his hearing certainly began to decline. It slowly declined until consequently, he was nearly totally deaf probably by the last decade of his life. As a result, he stopped conducting and performing. Nevertheless, he continued to compose. As a result, some of his greatest works probably come from this period.

Seems like we often divide Beethoven’s life into three periods. Period 1 begins with Beethoven’s arrival in Vienna. Hence, during this period, he mastered the Viennese style of Haydn & Mozart. He consequently began increasing the size and scale of his works. Furthermore, he experimented with extreme dynamics, and likewise extreme tempi. He worked similarly with chromatic harmony. His First and Second Symphonies, therefore, belong to this period. Other important works also belong here: the first six string quartets and the Sonata Pathétique, Op. 13.

His second period probably began as soon as he realized that he was going deaf. During this period, it seems like he became obsessed with the idea of heroism. His works consequently become even larger and more massive. The most noteworthy of these include the symphonies 3 – 8, piano concertos 5& 6, 5 string quartets, several important piano sonatas (Waldstein and Appassionata), the Kreutzer violin sonata, the violin concerto and his only opera: Fidelio.

In contrast, Beethoven's third period is branded above all by works of incredible intellectual depth, formal innovation, and penetrating expression. It seems like he continued to expand his works. Consequently, the string quartet Op. 131 spills over into seven connected movements. Likewise, in the Ninth Symphony, he adds choral forces to his orchestra probably for the first time in history. Even more, other works from this period include his Missa solemnis, the final 5 string quartets (including the enormous Große Fuge) and the final five sonatas for piano.

Register for free lifetime revisions and updates at www.jamesguthrie.com