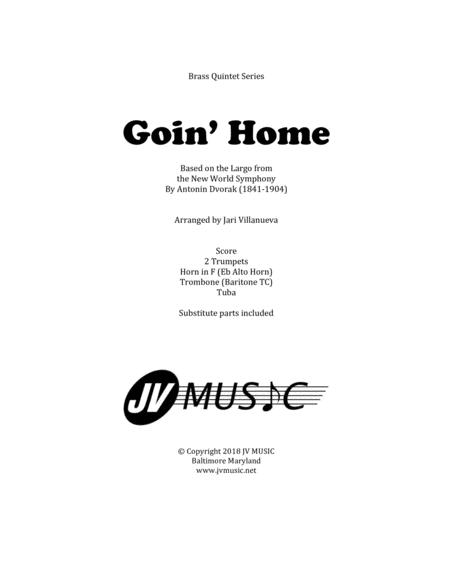 "Goin' Home," is based on the Czech composer Antonin Dvorak's famous "Largo" theme from his Symphony No. 9 (5) (From the New World), Op. 95. His symphony was composed while he was in America and was first performed by the New York Philharmonic at Carnegie Hall on December 16, 1893. It has been said that Dvorak's themes in his symphony were inspired by American folk melodies, especially Afro-American or American Indian. But his themes are just as similar to Bohemian folk music and most likely from that music. This arrangement is based on the one played in the movie “Clear and Present Danger” by the United States Air Force Band. It has been used at presidential funerals for the departure ceremonies at Andrews Air Force Base for Presidents Reagan and Ford and was used in 1998 for the dis-interment ceremony for the Vietnam Unknown at Arlington National Cemetery. It is still used today by military bands at Arlington.

Jari Villanueva earned a Bachelor of Music Education degree from the Peabody Conservatory of the Johns Hopkins University and a Master of Music from Kent State University, Ohio. He retired from the US Air Force Band in Washington DC where he spent 23 years as a trumpeter, bugler and staff arranger. He started his publishing company JV MUSIC in 1995. A student of Bill Holcombe, he continues writing for different ensembles and his arrangements are played by bands, brass ensembles and brass quintets all over the country.