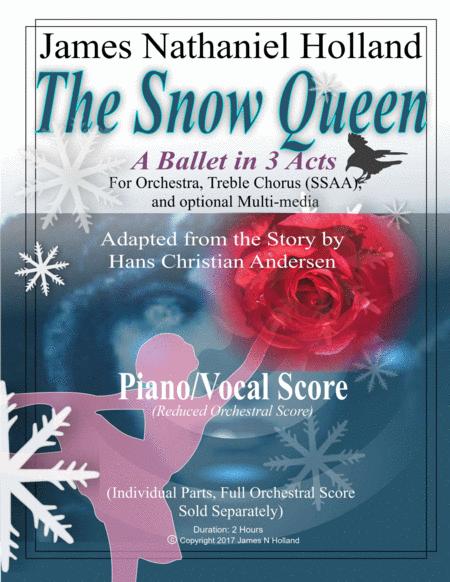 The Piano Vocal Score (with SA Chorus) New Contemporary Classical Music from American Costa Rican composer James Nathaniel Holland in his masterful ballet adaptation of Hans Christian Andersen's classic tale, "The Snow Queen." Ballet yet to be premiered. Be the first to produce it!

Ballet Synopsis: Evil Snow Sprites make a mirror that reflects all that is mean and evil. When it shatters, its splinters drift to the far corners of the world. Gerde and Kai are two poor children who live in Copenhagen in the early 19th Century. They live innocently with their parents and Grandmother and tend a rooftop rose garden. One winter night Kai meets the Snow Queen and a splinter from the mirror enters his eye. The Snow Queen returns and abducts Kai. Although accepted as dead, Gerde deeply feels otherwise and begins her quest to find her friend, traveling through the four seasons, sometimes beautiful and sometimes frightening.

The Lady of Spring takes her as an addition to her fantastical garden filled with tales and dreams of the flowers who dwell there. But when Gerde sees the rose on Spring's bonnet she wakes from her enchantment. Her tears spring back the roses who tell her Kai is not dead. She flees from the garden. Gerde grows up in the wilderness and a crow says
that he has seen Kai at the Palace of the Queen of Summer. They hurry there to find a magnificent ball in progress. Gerde is introduced to the Kai lookalike but knows something is not right. The Queen of Summer helps Gerde on her way and lends her a coach and gives her a magic red rose that will never fade.

As coach searches for Kai, it enters the season of Autumn and is accosted by robber girl and a band of theives. They dance in an rousing, energetic dance taunting her.

When the morning comes Gerde tells her fellow captive animals of her quest to find Kai and that all hope is lost. The pigeons finally tell Gerde that Kai was abducted by the Snow Queen many years ago. The robber girl overhears them and has a change of heart letting her go with her reindeer to the far North of the Snow Queen.

Gerde finds Kai in the palace of the Snow Queen piecing together the evil mirror. She gives Kai up for dead but leaves the rose of summer beside him. Kai spots the rose and he sheds a tear. The splinter falls out and he completes the mirror.

They head back for home to their families were there is a big finale of a beautiful wedding on a late summer day and live happily ever after.