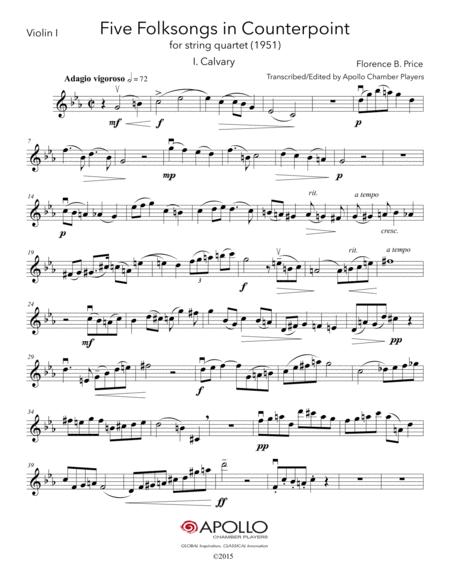 While researching works by African-American composers to include in a program of Henry Thacker Burleigh, Dvorak, and a new commission by Libby Larsen, we came upon this previously unearthed string quartet by FLORENCE B. PRICE collecting dust in the University of Arkansas Public Library. It came with no score and in manuscript form, and it required editing. Over the course of 30+ hours, I used Finale notation software to create a score and parts, which is what's available for purchase here.

We fell in love with this piece, each of the movements reflecting the hardship and celebration of African Americans. Beautiful, touching music. As Dvorak evangelized: 'Spirituals are the basis of a new American school of music.' We hope you enjoy learning and performing this wonderful work.

In her career, Price appears to have written two string quartets. One quartet was titled “Negro Folksongs for String Quartet”, composed in ca. 1949 or 1951, and included settings of four familiar spirituals: Go down, Moses; Lil’ David play on your harp; Somebody’s knockin’ at yo’ door; and Joshua fit de battle of Jericho. Her quartet “String Quartet on Negro Themes” was premiered at Carey Temple Church in 1951 but its contents were not indicated in any program. It may well be that these two works are one and the same quartet.

Five Folksongs in Counterpoint is a work for accomplished players. Technically challenging, the texture throughout the work is contrapuntal, that is, voice against voice, and conveys to the listener the serious treatment of these songs. The familiar melodies are shared between the instruments equally; in between thematic phrases is freely interpolated material. A convincing interpretation of these folksongs requires a flexible approach to the execution of the rhythms and an understanding of the subtle, but fluid, phrasing (now detached, now slurred even though it may not be marked in the score).

Referring to the site of the Crucifixion, the tune "Calvary" is often sung during the season of Lent. Price states the ominous tune at the outset in the violins and it is woven throughout the quartet’s voices, sometimes in fragments, but it always audible. The spiritual is at its most poignant when in the lower strings

"Clementine," the tongue-in-cheek American ballad, in a lively arrangement, is about the unfortunate demise of a girl who gets a foot splinter, falls over, and drowns. Seemingly simple in the beginning, this movement is anything but straightforward. The shimmering strings at the end humorously capture love lost and quickly forgotten.

"Drink to me only with thine eyes" is given hymn-like treatment, a familiar texture that Price uses in many of the slow movements of her instrumental music. This lovely arrangement includes rich texture and quite distinct glimpses of her interest in Impressionistic composers.

It is commonly thought that the lyrics of this spiritual, “Swing Low, Sweet Chariot, coming for to carry me home,” refers both to the Underground Railroad, the freedom movement that helped blacks escape from Southern slavery to the North and Canada and, alternatively, to the slaves escape from slavery through death and heaven’s deliverance. Dramatically, Price gives to solo cello the weighty tune. It is then treated in turn by the viola, violin II and finally violin I. Ultimately, the tune is given contrapuntal and rhapsodic treatment during which the spiritual is obscured completely. The movement concludes with an expansive rendition of the well-known tune, sometimes suggesting the minor mode, but triumphantly ending in the major key.