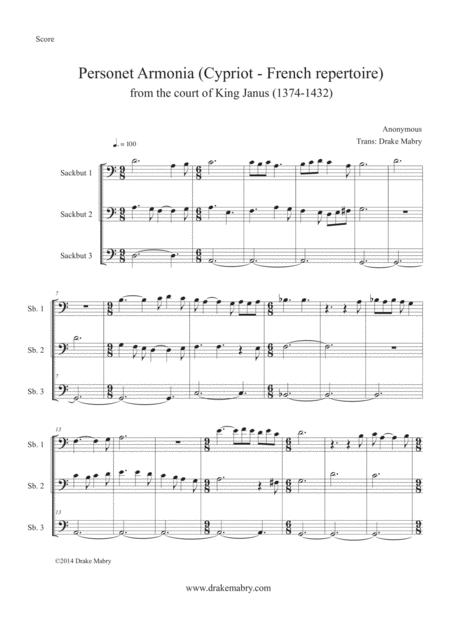 Personet Armonia comes from a collection of music composed in Cyprus during the beginning of the 15th century. Many French musicians and composers were active at the Cypriot court, and the town of Nicosia became one of the most important centers of the Ars Subtilior style. This piece provides a perfect introduction to the beautiful and mysterious world of this 14th and 15th century musical style. The duration is 3'50.

The King, Janus I de Lusignan (1374-1432), was one of the most important figures in the music life of Cyprus. His daughter Anna, upon her marriage to Louis, Count of Geneva, took with her a thick manuscript, written between 1413 and 1426.

It consists of 159 folios containing over two hundred polyphonic compositions both sacred and secular. Two peculiarities make this manuscript unique: first, not a single composer is mentioned by name; and second, each work is without exception a unique copy: not one has ever been found in any other manuscript. This, then, is the only record of the Cypriot Ars Subtilior style.

The central compositional concern of those working in the Cypriot Ars Subtilior style was the logical, consistent attainment of the polyphonic ideal. Each voice is completely independent of the others, and moves through the polyphonic fabric to form a contour of its own. As to rhythm, Cypriot compositional technique is extremely complex. Ample use was made of rhythmic novelties such as syncopation, color and proportion, and new note symbols permitted the representation of note values that had previously defied graphical rendering. Thus, metric accents in the different voices almost never coincide, and the "laws" of rhythm were at times out of joint. In fact, a rhythm that was regular and without syncopation would stand out immediately as particularly conspicuous detail.

I have also adapted this trio in versions for either clarinets or recorders. Paul Van Nevel has recorded a version for three sackbuts with his Huelgas Ensemble.