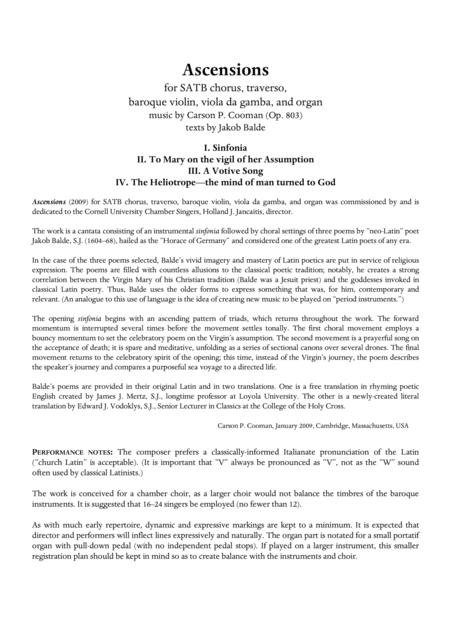 I. Sinfonia
II. To Mary on the vigil of her Assumption
III. A Votive Song
IV. The Heliotrope—the mind of man turned to God

Ascensions (2009) for SATB chorus, traverso, baroque violin, viola da gamba, and organ was commissioned by and is
dedicated to the Cornell University Chamber Singers, Holland J. Jancaitis, director.
The work is a cantata consisting of an instrumental sinfonia followed by choral settings of three poems by “neo-Latin” poet
Jakob Balde, S.J. (1604–68), hailed as the “Horace of Germany” and considered one of the greatest Latin poets of any era.
In the case of the three poems selected, Balde’s vivid imagery and mastery of Latin poetics are put in service of religious
expression. The poems are filled with countless allusions to the classical poetic tradition; notably, he creates a strong
correlation between the Virgin Mary of his Christian tradition (Balde was a Jesuit priest) and the goddesses invoked in
classical Latin poetry. Thus, Balde uses the older forms to express something that was, for him, contemporary and
relevant. (An analogue to this use of language is the idea of creating new music to be played on “period instruments.”)
The opening sinfonia begins with an ascending pattern of triads, which returns throughout the work. The forward
momentum is interrupted several times before the movement settles tonally. The first choral movement employs a
bouncy momentum to set the celebratory poem on the Virgin’s assumption. The second movement is a prayerful song on
the acceptance of death; it is spare and meditative, unfolding as a series of sectional canons over several drones. The final
movement returns to the celebratory spirit of the opening; this time, instead of the Virgin’s journey, the poem describes
the speaker’s journey and compares a purposeful sea voyage to a directed life.
Balde’s poems are provided in their original Latin and in two translations. One is a free translation in rhyming poetic
English created by James J. Mertz, S.J., longtime professor at Loyola University. The other is a newly-created literal
translation by Edward J. Vodoklys, S.J., Senior Lecturer in Classics at the College of the Holy Cross.
Carson P. Cooman, January 2009, Cambridge, Massachusetts, USA
PERFORMANCE NOTES: The composer prefers a classically-informed Italianate pronunciation of the Latin
(“church Latin” is acceptable). (It is important that “V” always be pronounced as “V”, not as the “W” sound
often used by classical Latinists.)
The work is conceived for a chamber choir, as a larger choir would not balance the timbres of the baroque
instruments. It is suggested that 16–24 singers be employed (no fewer than 12).
As with much early repertoire, dynamic and expressive markings are kept to a minimum. It is expected that
director and performers will inflect lines expressively and naturally. The organ part is notated for a small portatif
organ with pull-down pedal (with no independent pedal stops). If played on a larger instrument, this smaller
registration plan should be kept in mind so as to create balance with the instruments and choir