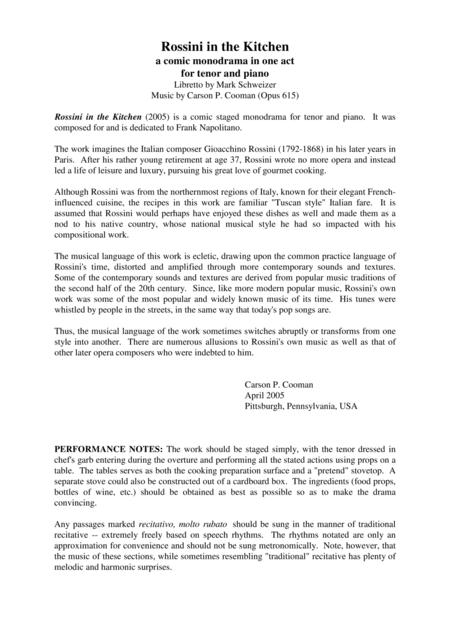 Rossini in the Kitchen (2005) is a comic staged monodrama for tenor and piano. It was
composed for and is dedicated to Frank Napolitano.
The work imagines the Italian composer Gioacchino Rossini (1792-1868) in his later years in
Paris. After his rather young retirement at age 37, Rossini wrote no more opera and instead
led a life of leisure and luxury, pursuing his great love of gourmet cooking.
Although Rossini was from the northernmost regions of Italy, known for their elegant Frenchinfluenced
cuisine, the recipes in this work are familiar "Tuscan style" Italian fare. It is
assumed that Rossini would perhaps have enjoyed these dishes as well and made them as a
nod to his native country, whose national musical style he had so impacted with his
compositional work.
The musical language of this work is ecletic, drawing upon the common practice language of
Rossini's time, distorted and amplified through more contemporary sounds and textures.
Some of the contemporary sounds and textures are derived from popular music traditions of
the second half of the 20th century. Since, like more modern popular music, Rossini's own
work was some of the most popular and widely known music of its time. His tunes were
whistled by people in the streets, in the same way that today's pop songs are.
Thus, the musical language of the work sometimes switches abruptly or transforms from one
style into another. There are numerous allusions to Rossini's own music as well as that of
other later opera composers who were indebted to him.