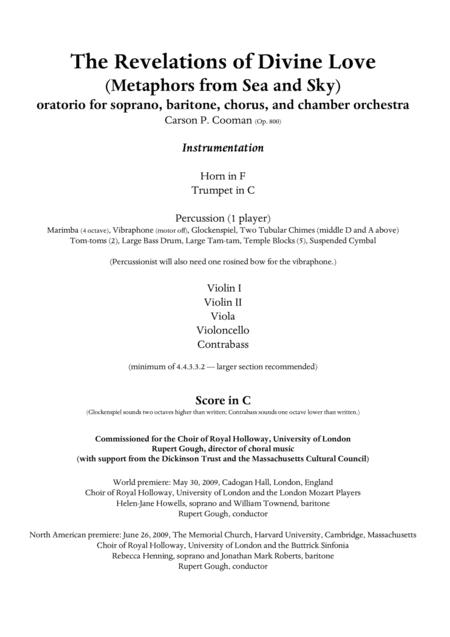 The Revelations of Divine Love (Metaphors from Sea and Sky) (2009), an oratorio for soprano,
baritone, chorus, and chamber orchestra (0000.1100.1perc.strings), was commissioned for and is dedicated to the choir of
Royal Holloway, University of London and Rupert Gough, director of choral music.
The texts of the work are adapted primarily from the writings of Julian of Norwich (c. 1342–1416).
Julian is best-known for her Sixteen Revelations of Divine Love (c. 1393), believed to be the first Englishlanguage
book written by a woman. Considered one of the most significant English mystics of all
time, Julian lived a reclusive life as an anchoress at the Church of St. Julian in Norwich, England (her
true name is unknown). Regarded even during her lifetime as a spiritual authority, her optimistic
visions have been very influential in the years that have followed.
Texts are also drawn from three additional sources: an excerpt from the Book of Margery Kempe
(translated by Christopher M. Brunelle), two poems by English poet Robert Herrick (1591–1674),
and a poem by the American writer Elizabeth Kirschner (b. 1955).
The primary concept underlying this oratorio is the presence of two distinct discourses. One is a
sequence taken from Julian’s religious visions. The other is a “sonic geography” of Nantucket Island
(located 30 miles off the coast of Massachusetts in the United States). This interconnected concept
was inspired by the writings of the great Scottish poet George Mackay Brown (1921–1996). Living
his entire life on Scotland’s Orkney Islands, Mackay Brown consistently explored the “transposition”
of religious imagery and events to his native landscape. (For example, the poem Apple-Basket, Apple-
Blossom takes the story and structure of the Stations of the Cross, and maps them onto imagery of
distinctly Orcadian character.)
The landscape of Nantucket Island has been the driving force behind a large number of my
compositions for many years. In this oratorio, Julian’s visions are transposed from Norwich and
mapped onto the Nantucket landscape. Each movement of the work thus has two parallel purposes:
a setting of the visionary words, and a portrayal of a specific place in Nantucket’s geography. Much
of the music was planned in the actual locations. Since the soloists and choir must, by necessity, sing
the words, a great deal of the landscape is left to the orchestra. Thus, the orchestra’s role is
substantially greater than simply accompaniment.
Because of these two discourses, the oratorio is not intended as comprehensive “working out” of all
aspects of Julian’s visions, nor does it use her own structure and sequence. Rather, it takes her
beautiful words, and the fundamentals of her visions, and attempts to create a new narrative and
spiritual experience from them.﻿

This is the full score.  The vocal score is available for sale.  The parts are available on rental from the publisher.