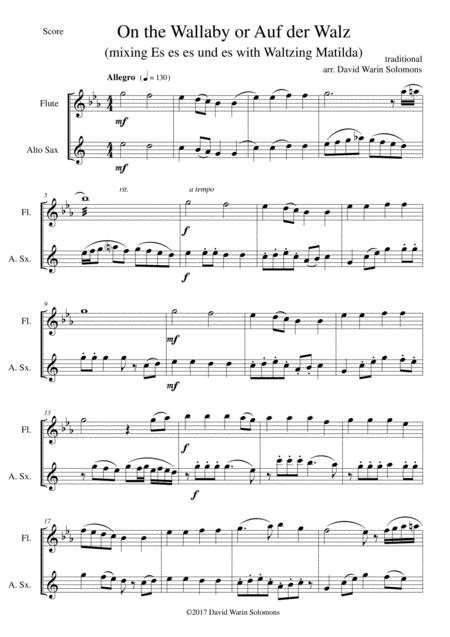 Journeymen (young craftsmen) in Germany used to be required by law to go from town to town to practise their skills rather than stay in one town, which gave rise to many songs, of which "Es es es und es" is the best known - (the words of that song mean "it is a hard conclusion but I have to leave this town).
These journeys were referred to as "Walz" so these workers went "auf der Walz".
The idea of travelling auf der Walz was also taken up in Australia (where they called it "on the Waltz" or "on the Wallaby") and it gave rise to the famous song Waltzing Matilda, although in the Ozzie song the traveller was a swagman rather than a craftsman. So I have called this arrangement "On the Wallaby".
In neither case was the 3/4 time of the Waltz used although there is probably a connection: I initially tried to create this merged arrangement in 3/4 but it didn't seem to work satisfactorily...
So here is a 4/4 "waltz" based on the two traditional and related songs.
The pdf file contains score and parts.
The sound sample is an electronic preview