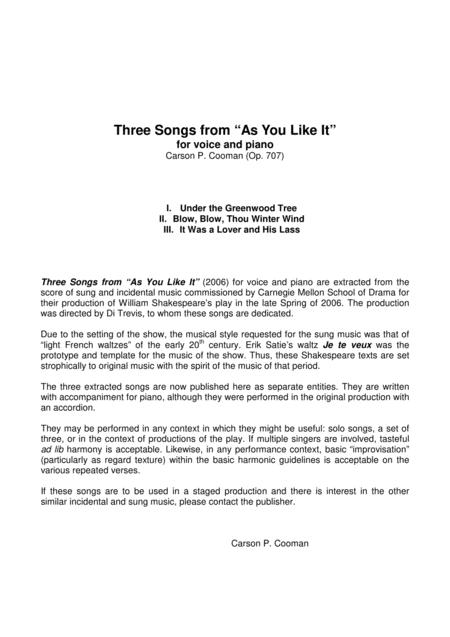 I. Under the Greenwood Tree
II. Blow, Blow, Thou Winter Wind
III. It Was a Lover and His Lass
Three Songs from “As You Like It” (2006) for voice and piano are extracted from the
score of sung and incidental music commissioned by Carnegie Mellon School of Drama for
their production of William Shakespeare’s play in the late Spring of 2006. The production
was directed by Di Trevis, to whom these songs are dedicated.
Due to the setting of the show, the musical style requested for the sung music was that of
“light French waltzes” of the early 20th century. Erik Satie’s waltz Je te veux was the
prototype and template for the music of the show. Thus, these Shakespeare texts are set
strophically to original music with the spirit of the music of that period.
The three extracted songs are now published here as separate entities. They are written
with accompaniment for piano, although they were performed in the original production with
an accordion.
They may be performed in any context in which they might be useful: solo songs, a set of
three, or in the context of productions of the play. If multiple singers are involved, tasteful
ad lib harmony is acceptable. Likewise, in any performance context, basic “improvisation”
(particularly as regard texture) within the basic harmonic guidelines is acceptable on the
various repeated verses.
If these songs are to be used in a staged production and there is interest in the other
similar incidental and sung music, please contact the publisher.