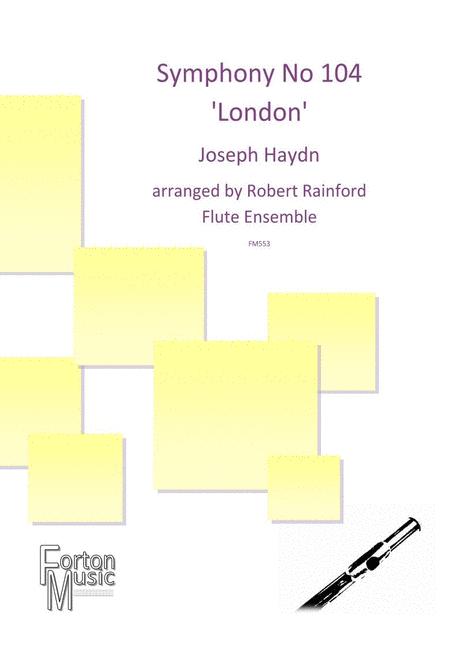 This is an arrangement of the last symphony that Haydn wrote. It was composed and premiered in London in 1795, and was an instant success. Following the standard four movement pattern of the time, it starts with a slow, serious introduction before the lighter, fast first movement begins properly. Using just one main theme, Haydn spins a delightful series of moods and emotions before rushing to the exciting conclusion. The second movement is more measured and controlled, but with episodes of drama and tension. The third movement is a traditional minuet and trio, with the lightness and humour of Haydn. The last movement has elements of folk music, with it's opening low drone and peasant like melody. Haydn however alternates the romping first section ideas with a more sophisticated, legato second section. This creates a delicious balance and has to make for one of the most satisfying symphonies ever written. This arrangement has been created with a range of playing standards in mind. The first and last movements use the full resources of the flute choir right down to the lowest double contrabass in C. The rarer flutes have optional parts so can be safely omitted, but add great depth to the sound. Flute 1 is quite complicated and involved, but then the parts get easier until flute 4 is fairly basic and could be easily realised by players with less experience. The second and third movements have been thinned down, with piccolo, G treble, contr'alto, subcontrabass in G and double contrabass in C being tacet. Also in these movements, flute 1 and 2 take the same line, while flute 3 and 4 are similarly in unison, with an optional contrabass part. These movements may be taken by four or five solo players, or some sections could be solos and others played by the full ensemble, or many other options.