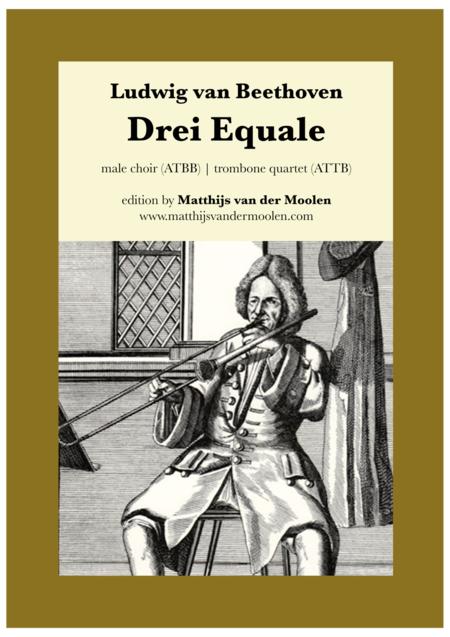 These ‘Three Equali’ are amongst the few pieces that were written for trombone ensemble by a well- known composer, and therefor they are very important pieces for the trombone repertoire.This particular edition is different from the ones that most trombone players know. First of all, it contains a score for male choir. And secondly, it is transposed a major second down. The reason for this is that the original version is too high for the male voices.The version for male choir was added to the first and the last movement by Ignaz Seyfried, a friend of Beethoven. To make the words fit to the music, he had to be quite free with interpreting the rhythmical structure that Beethoven composed. It is debatable if the vocal and instrumental version should be performed all together or alternating with each other. According to the notes about Beethoven’s funeral (where the first and last movement were performed), the voices and instruments were alternating during this performance.The second movement was performed on a later moment, but the link between the instrumental version (with text by Frans Grillparzer) was not made. I have taken the freedom to put these two together in this score, and transposed it one major second down to make it fit smoothly in between the other two movements.The first and last movement also contained a text in Latin, but since the second movement was only available in German, I also used the German texts for the other movements.