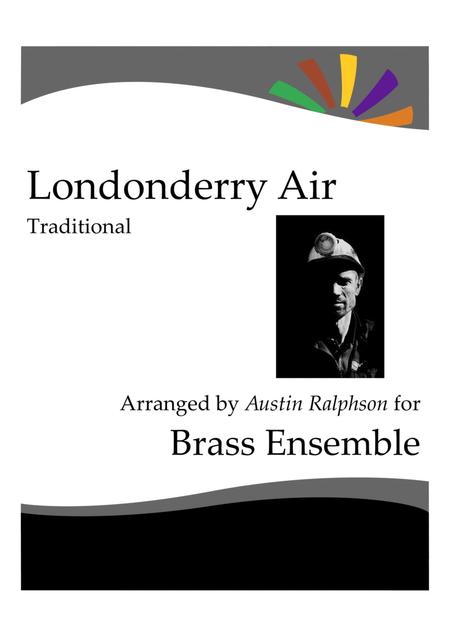 This is a very special arrangement of The Londonderry Air, which was done in tribute to the film Brassed Off. Performance directions are included. In the film, the conductor of the band is lying on his deathbed. The players in the band gather round and play The Londonderry Air at this point in the film. They are from the local Northern mining community. It is for nine brass players (not ten) and is incredibly effective. The arrangement starts with a solo trumpet or cornet and gradually builds up as more instrument enter. It then finishes as a mirror image of this pattern, with instruments dropping out one at a time, leaving a solitary trumpet or cornet to finish off.Each player will need a thick black miner’s jacket, black trousers, black shoes, a miner’s helmet and a miner’s helmet light. They walk on stage, one at a time, wearing this gear, but with the helmet lights switched off. It is best performed as follows:The stage lights dim as low as possible. The first trumpet player walks silently onto the stage and switches on his helmet light. He then starts to play the piece (standing). One by one, the other players enter, each switching on their lights just before they play. When a player has finished playing, he switches off his light and stands, head bowed, in silence. The piece will finish with all players on stage and the 3rd trumpet player finishing off. He will then switch his light out as the final closing to the piece.This piece has been performed in this manner on many occasions and always has a very moving effect on the audience. Please enjoy the attached mp3 recording of a live performance to get a much better idea of how it sounds. Thanks go to the Wire Brass Ensemble (Warrington, UK) and Stanley Road Studios (Manchester, UK) for recording it.