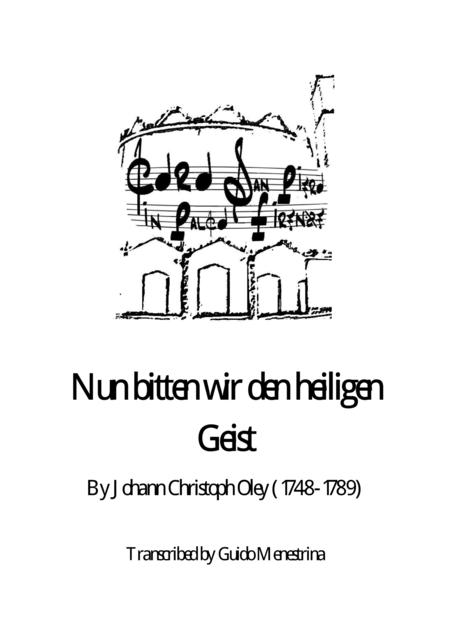 2 keyb with pedal - score. Transcription by Guido MenestrinaAbout the composer:Born: May/June 1748 (baptised: June 3, 1738) - Bernburg, GermanyDied: January 20, 1789 - Aschersleben, GermanyJohann Christoph Oley was a German organist and composer. There is some evidence that he studied with J.S. Bach for a short time in 1749, but none connecting him with the Thomasschule. In 1755 he became organist of the church in Bernburg, but moved to the church of St Stephan in neighbouring Aschersleben in January 1762 because of its superior organ. To augment his salary he assumed the duties of assistant schoolmaster as well.Contemporaries praised Johann Christoph Oley’s skill on the keyboard and organ, and his compositions attracted some interest. His organ writing reminded Johann Friedrich Agricola, another Bach pupil, of the glories of an earlier age. J. Beckmann, in a review of 1778, criticized carelessness in his harmony, giving credence perhaps to Gerber’s statement that in the main Oley was self-taught. Bach’s personal influence was probably insignificant: Emery has suggested that certain details in the copies of Bach’s music that Oley made on his return to Bernburg, and later, reveal an unfamiliarity with his practice. Sietz mentioned some manuscript works by Oley in a private collection in Dessau, but only a set of 14 keyboard variations (published in Nuremberg, n.d) and the four-volume Variirte Choräle (Quedlinburg, 1773-1792) seem to be extant. The latter work contains 77 settings for organ solo (10 ed. W. Emery, London, 1958 and 1964; others ed. W. Syré, Locarno, 1987), two for solo oboe and organ, and six for organ and instrumental ensemble of flute, oboe, bassoon, horn, two violins, viola and cello (2 ed. F. Haselböck, Stuttgart, 1976). The most interesting combine his fondness for strict canon with passages in the more expressive style. Oley owned one of the four extant copies of the Schübler chorales (in A-Wn, with Bach’s corrections), but in spite of speculation to the contrary he probably did not have access to Bach’s estate.