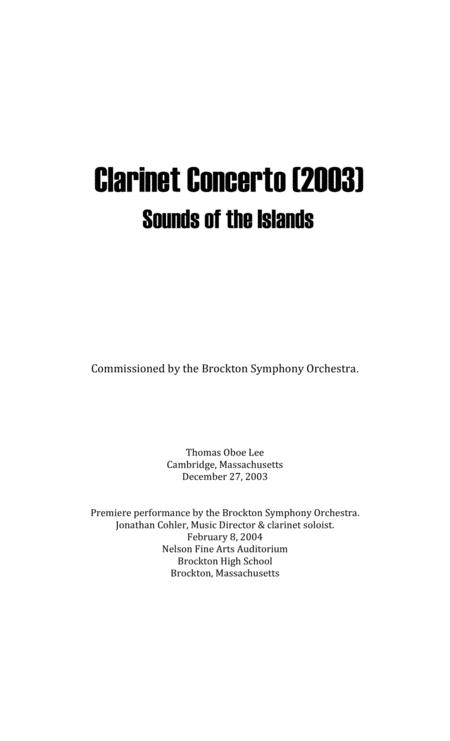 When Andrea Bates, executive director of the Brockton Symphony Orchestra, first told me that the Brockton Symphony had commissioned me to write a new work to be premiered in 2003-2004, I immediately thought that since its music director, Jonathan Cohler, is a marvelous clarinetist I would be most attracted to the idea of writing a clarinet concerto for the occasion. Both Andrea and Jonathan were very receptive and enthusiastic about my idea. Andrea also told me that the commissioned work should somehow bring to attention the diverse cultures of the recent immigrants that have settled in the city of Brockton. So in the spring of 2003 I came down to Brockton for a meeting to which Andrea had invited representative members of these new communities. Three showed up: Maria Evora-Rosa, Rick Marrero and Fred Fontaine. Andrea had asked them to bring recordings of the music from their countries for me to listen to. There were CDs of very exciting and fun music from Cape Verde, Puerto Rico, Cuba, the Dominican Republic and Haiti. After spending months listening to the music from these countries, all of them islands in the Atlantic or the Caribbean, I slowly began to get a sense of the beauty and the magic of the musical style and language of each place, each individual island. The end result is a three-movement work for clarinet and orchestra.

Unlike the traditional Concerto form which is Fast-Slow-Fast, this work begins with something slow. A fast number follows as a second movement; and then, after a short, slow interlude, another fast number appears. The first movement is my adaptation of the “morna” of Cape Verde – slow, melancholy and sad. The diva of the “morna” is Cesaria Evora. Her singing brings to mind a fusion between the African “blues” and the Portuguese “fado.” The second movement is my take on the “merengue” as performed by the inimitable Xavier Cugat. It is dance music through and through!!! The third movement is also a dance number: the ever-popular music from Haiti, the reggae. And in order to give some contrast between the two dance numbers, I added a slow chorale for clarinet and strings that serves as a prelude before the dancing begins in the final movement. I envision the chorale as a little church music before the people go out and dance the night away. Throughout the entire work, the solo clarinet is the principal voice … singing, dancing, and cavorting!!! Gotta dance!!!

Have fun and enjoy the music!!! I surely did as I was working on it ….