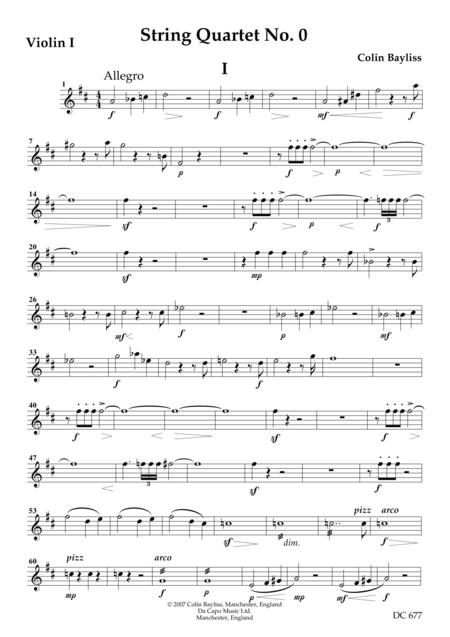 The work was completed on February 2nd 1970 and is the first piece to be retainedby the composer after he had destroyed all his earlier compositions.The Score is available as a separate downloadThe following is taken from the catalogue of the composer's works:-The photocopy of the MS is marked String Quartet No. 1, but is not regarded by the composer as part of hismature string quartet writing. The MS itself was lost in a fire at the home of Col. Robert Tong, formerlyRegistrar of Queen Mary College, University of London. A typesetting was made in November 2000 as thephotocopy had faded so badly. The composer's sketch books suggest that the movements were written in the order3,2,4,1.1. Allegro2. Scherzo (Allegro energico)Trio I - tempo di menuetto Trio II - no tempo indicated - [andante]3. Andante con moto4. Allegro ma non troppoComposer's note:-As the above suggests, I originally had no intention of publishing this early piece.The recording by the Lochrian String Quartet of the six numberedquartets, however , together with sleeve notes admitting the existence ofthis work, prompted me into revising my opinion and allowing itspublication, so that anyone wishing to study this first effort may do so.It shows certain traits that I was to develop in the six quartets and othersthat I was to discard, and therefore is of musicological interest. It alsohas a few good, albeit imitative, tunes!Duration: Approx. 25 mins.COLIN BAYLISS was born in Mansfield, Nottinghamshire in 1948. His life-longlove of music led him to compose from an early age and he now has a catalogue ofover a hundred works including two operas, four symphonies, six string quartetsand many other pieces for most instrumental and chamber groupings, overseventy of them published.He is a member of the British Academy of Composers and Songwriters, the NorthWest Composers' Association and the Performing Rights Society.As well as writing music himself, he has also compiled annotated catalogues of theworks of Anthony Hedges and Sir Peter Maxwell Davies.CDs of his piano music played by David Martin and complete organ music playedby Ronald Frost are available on the New Century Classics label.Please feel free to use these biographical and programme notes in your concert programmes.