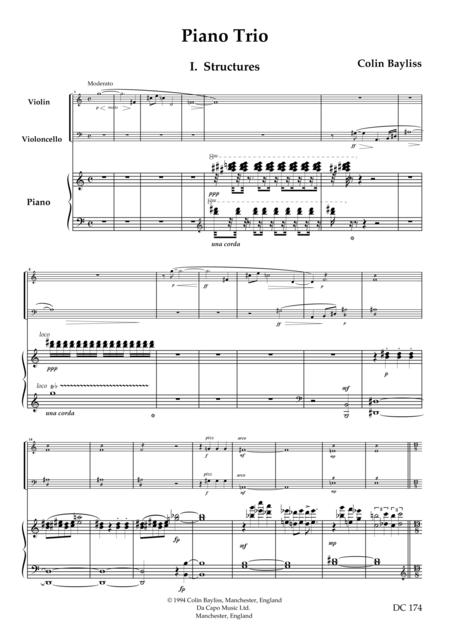 Piano Trio (B44) was written in the spring of 1991 for David Johnson and the trio which he was forming in Cologne.The work is in three movements:-1. Structures The three instruments build differing structural patterns based on a 12-note row. The violin and 'cello often complement each other, but the piano rarely joins them and tries to pull the music towards a diatonic tonal language, eventually succeeding to end in G major. The movement is in arch form, the second half being based on the retrogrades of the note row.2. Textures Most forms of sound textures are used, including col legno and sul ponticello for the strings, while the piano occasionally employs soft-headed timpani sticks both on the keyboard and the interior of the instrument. Again the movement is in arch form, with a central section incorporating a miniature scherzo, with a trio section parodying the "palm court" trio style with a tune of sickly sentimentality. [ This movement may be played separately under the title “Einer Kleiner Alptraum - A Little Night... mare”]3. Metamorphoses The notes which will eventually become a Scottish folk tune are hidden either in the repeated notes or in the left hand of the piano, either singly or in harmony. After a neo- classical exposition, using a serial melody, progress is quickly halted by the use of some of the notes of the folk tune being arranged into the theme of Weber's Turandot which was used by Hindemith in his Symphonic Metamorphoses . This pulls the music into a slightly more tonal frame work which becomes more pronounced after a reference to the theme of the slow movement of the Eroica symphony used in Richard Strauss' Metamorphosen. From then onwards, tonality, or rather modality, is established and the folk tune style is maintained with simplicity to the end, except for a miniscule coda reminiscent of the opening of the movement.The sound sample is a performance of the second movement Textures.