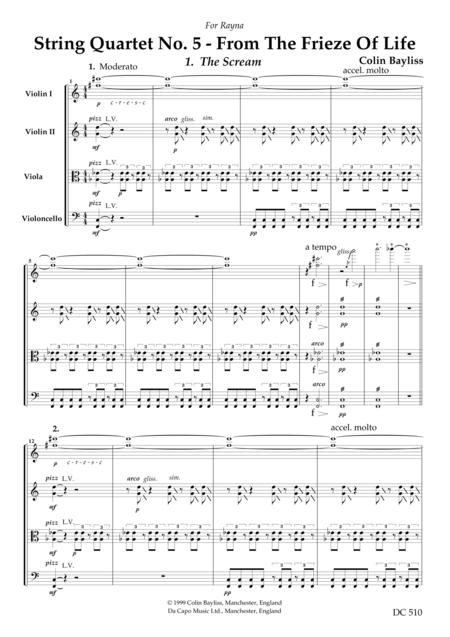 This work was written in 1999 for an international competition for quartets reflecting in music the visionsin three of Edvard Munch's paintings. It is dedicated to the composer's wife, Rayna.1.The Scream - Moderato - There are 51 versions of The Scream and the movement is in 51 sectionsgrouped roughly into sonata form. The development is largely textural, and the movement hinges abouta chord formed of open fifths a major third apart which will also re-appear in the other movements to givethe quartet its sense of unity. The screaming is both audible and silent, and the footsteps on the bridge areportrayed both in a sense of passing by and also of running away.2.Melancholy - Andante - Munch gave other titles to this painting, namely Jappe by the Shore andJealousy. As jealousy and melancholy are retrospective emotions, tonal and modal music is employed,using the Norwegian folk songMillom bakkar og berg ut met havet set in a minor key for the first section.The A-B-A form then partially loses tonality forJealousy, while returning to it for Melancholy itself.3.The Dance of Life - Allegro - This movement is in rondo form, with hints of Norwegian countrydances for the dancers in the painting. The two women are portrayed as one looking nostalgically to thelight-heartedness of the old waltz and the other brooding on the darkness and latent sexuality of the newtango, the melodies for both of which are also corruptions of the country dances. The "Munch" chordalters the perspective on the scene as the movement progresses and eventually dissolves at the end asthough the onlooker is passing on to another, equally unresolved future.The Score and Parts are available on this site as separate downloadsThe sound sample is the second movement - performed by the Lochrian EnsembleThe complete 6 string quartets performed by the Lochrian Ensemble are available on itunes:see: http://www.dwsolo.com/colinbayliss/.