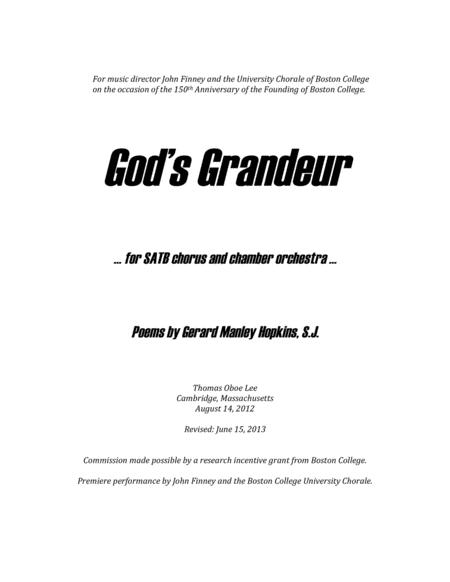 During the spring of the Millennial year 2000, music director John Finney and the Boston College University Chorale premiered my "Mass for the Holy Year 2000" for chorus and orchestra in Trinity Chapel at Boston College. It was a large work, close to an hour long in duration. It was a momentous occasion and I was extremely pleased with the performance by John and the BC University Chorale.Ten years later in anticipation of the 150th Anniversary of the founding of Boston College, I decided that I wanted to write another choral work for the BC Chorale. This time the subject would be something directly connected to the Jesuit identity of Boston College. I chose for text the poems of Gerard Manley Hopkins, S.J. (1844-1889).This Manley Hopkins project would come in two parts. Part One would be a private uttering of faith in God, and Part Two would be a public declamation of the same topic. The private utterance would be in a chamber setting. I decided on a song cycle setting for soprano and piano. The public declamation would be the choral work with orchestra for the Boston College University Chorale.1. Part The First … THOU mastering me God! (2010) for soprano and pianoThe ten poems for this song cycle came from GMH's "The Wreck of the Deutschland," Part the First.This 30-minute song cycle was premiered in Bapst Library on March 31, 2011. The performers were Megan Stapleton, soprano, and Diane Braun, piano.2. God's Grandeur (2012) for SATB chorus and chamber orchestra.For this work I chose five poems by GMH.Pied BeautyGod's GrandeurThe Habit of PerfectionThou Art Indeed Just, Lord.InversnaidWhy did I choose GMH's work besides the fact that he was a Jesuit? I was very surprised and thrilled that his poems are so fanciful, imaginative and abstract in form and content for someone who lived in the 19th century. These abstract poetic qualities are the very things that a composer in the 20th and 21st centuries would find inspiring when they are seeking texts for musical settings. I did indeed find the sound and silences of GMH's words quite inspirational. Hearing music in those words came directly and quickly as I was working on the piece.I hope the audience will enjoy the work as much as I did when I was creating it.