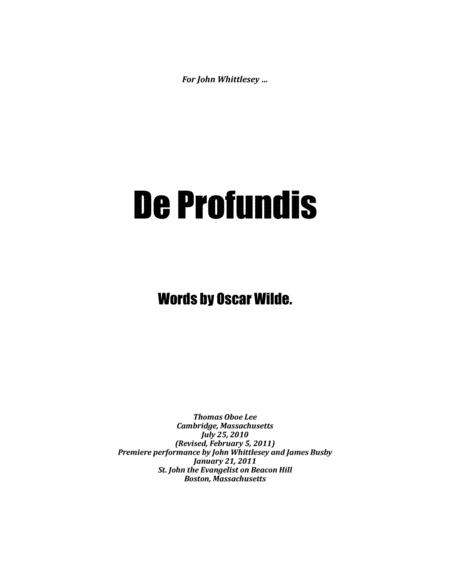 Program note:
In 2005, Paul Hodes and I embarked on an opera project on the life of Oscar Wilde. Paul wrote the libretto using mostly words penned by Mr. Wilde himself. Granite State Opera, under the direction of Phil Lauriat, produced a workshop performance of Act One in January 2006 at the Concord Community Music School in Concord, New Hampshire. I was quite pleased with the outcome, but GSO decided not to produce the work. And therefore Act Two never saw the light of day … “De Profundis,” Oscar Wilde’s book-length letter to Lord Alfred Douglas, aka Bosie, had to wait for another day.

In the meanwhile, I met John Whittlesey, artistic director of Intermezzo, in 2006 and we agreed to do a chamber opera on the life of Arthur Crew Inman, a Boston diarist and recluse who lived in the Back Bay area of Boston from 1919 to 1963. The two-act opera was produced by Intermezzo in the fall of 2007. Both John and I were quite pleased with the outcome.

This year John has decided to present a vocal recital with Intermezzo for the coming season 2010-11 entitled “Boys Night Out.” The main feature of the evening is a Dominick Argento work, “The Andrée Expedition” for baritone and piano. I suggested to John that I should write a new work for him for this occasion. He asked what text I had in mind? I suggested “De Profundis” by Oscar Wilde. John said yes.

The huge task of winnowing the text (often indulgently verbose and over-the-top, which is to be expected from someone as flamboyant and so-full-of-himself as Mr. Wilde) from 118 pages to something that would be suitable for a recital was enormous. John had set a time limit of 15 minutes. So, between Jesse Martin (the librettist for the Inman opera) and I, we managed to reduce the original text to about a page and a half. The song cycle is in three parts, and every single word is Oscar Wilde’s.

Audio link.  Copy and paste the URL link into your browser.