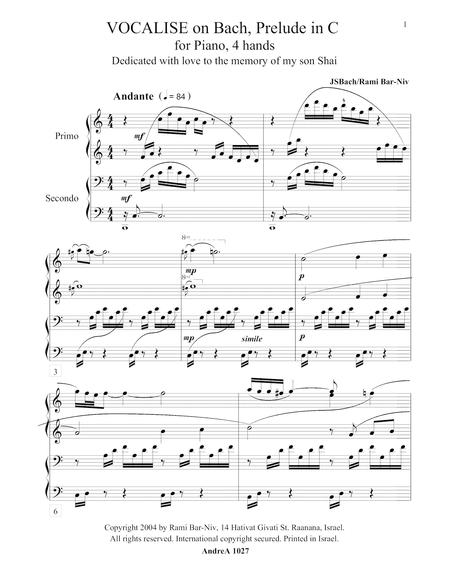 Secondo plays Bach's Prelude in C (which can be done at the Early Intermediate level) while Primo "goes to town" with Bar-Niv's Vocalise. The MP3 recording is of the 2-hands solo version. Dedicated with love to the memory of my son Shai.Rami Bar-Niv is one of Israel's most acclaimed and sought after pianists. He travels extensively and has become an international citizen, concertizing all over the world. Born in Tel-Aviv in December 1945, Bar-Niv graduated with honors from the Rubin Academy of Music, and was the recipient of various prizes and scholarships. He won the America-Israel Cultural Foundation Competition and was awarded a scholarship to further his studies in the United States. After graduating from the Mannes College of Music in New York, where he studied with the renowned Mme. Nadia Reisenberg, he won numerous competitions, and embarked on a successful concert career. He is heard regularly in North, Central, and South America, Europe, Africa, Asia, Australia, New Zealand, and Israel, where he received the "Best Performer Award" from the Israeli government.Rami Bar-Niv performs as a soloist with orchestras, as a recitalist, and as a chamber musician. He appears in live concerts, on radio, and on television, and is always received with great enthusiasm. Often sent abroad by the Foreign Ministry to represent Israel in concerts, he has become an ambassador of goodwill for Israel. Bar-Niv made history by being the first, and so far the only, Israeli artist to perform in Egypt following the Begin/Sadat Peace Treaty.His recordings for CBS and other labels in Israel and abroad have met with praise and popularity. His compositions are published, recorded, and performed all over the world. He has often been at the top of the charts on various Internet music sites such as MP3.com, YouTube, and many others. Along with his concerts, he has been teaching all over the world, giving master classes, lectures, workshops, and private lessons. Since 2006 he has been offering a week-long piano camp for adults twice a year in the United States.